Blockchain is the B when we talk about the “ABCD” of Fintech. As time goes by, we see more businesses and institutions interested in using blockchain technologies and we see how the list of available blockchain technologies is becoming longer every day. The reason for the interest in Blockchain platforms is mainly their central attributes that provide security, anonymity, and data integrity without an intermediary like a central clearinghouse, bank, or other entities. However, it is a digital platform based on a cryptographic mechanism/protocol, which regulates the generation, verification, and transaction recording in an open and distributed public digital ledger between two or more parties without a central clearing house as in the case of a traditional financial system.

In this publication, we will discuss the 3 major and most popular blockchain platforms, Bitcoin, Ethereum, and Hyperledger. But first, let’s look at the blockchain and its characteristics. Needless to say, our writing is based on our own research and does not purport to be an expert exposé on blockchain technology in general.

Blockchain is a distributed, transactional database with a growing record of (historical) data, compiled as virtual blocks that are shared across all the nodes participating in the relevant network. These blocks form a chronological chain providing a trail of the underlying transaction. Basically, the blockchain acts as a distributed ledger. It is a digital record of transactions and ownership, that is replicated among all the participants of a peer-to-peer network.

The blocks created in a blockchain are cryptographically sealed in the chain meaning that it becomes impossible to delete, edit, or copy already created blocks without everyone on the chain knowing that someone tried to alter something. The technology is set up in such a way that it doesn’t allow for anyone to fake or change any information; in other words, the data stored in a blockchain are immutable.

Blockchain technology platforms can be further distinguished with permission restrictions known as “Permissionless” and “Permissioned”. Permissionless blockchains are fully public blockchains, where anyone can do anything from reading data to performing transactions. Permissioned blockchain technology allows the owner of the blockchain to define different permissions on different users on the network. There can be different permissions for reading data, creating transactions, validating blocks, creating new ones, and others. Blockchains platforms can be built for a specific purpose or can be generic in nature.

Another characteristic of blockchain platforms is that they are consensus-based when validating the work performed. There are two models known to establish consensus: proof of work and proof of stake. Proof of work is a “decentralized” consensus mechanism that requires members of a blockchain network, called miners, to expend effort solving an arbitrary mathematical puzzle to prevent anybody from gaming the system. That effort requires huge amounts of energy (which of course translates to high electricity bills), which only increases as more miners join the network.

Proof of stake is a type of consensus protocol used by blockchain networks to achieve “distributed” consensus. Distributed means that you have several validators on the platform. It requires users to “stake” their cryptocurrency or tokens to become a validator in the network. Validators are responsible for the same thing as miners in proof-of-work mainly ordering transactions and creating new blocks so that all nodes can agree on the state of the network. Proof of stake gives mining power based on the percentage of cryptocurrency or tokens held by a validator

Further, in case you were wondering decentralized simply means not centralized. Online social applications like Facebook, Instagram, WhatsApp, and Twitter are examples of centralized systems. With decentralized systems, the control, as opposed to with a single “centralized” entity, lies with the end-users. BitTorrent, the somewhat infamous peer-to-peer network, is an ideal example of how this works: the peers are responsible for the availability of content on the network. The more peers seeding the data, the higher is the availability and download speed. Decentralized systems just like distributed architecture have no single point of failure. Even if several nodes go down, the network as a whole is still up.

In the blockchain world, we may come across the term native currency. Native currency refers to whether the blockchain has an inherent currency. With the masses, they are popularly known as cryptocurrencies. For example, Bitcoin uses its currency “bitcoin” as a medium for exchange. Ethereum uses “ether”. But Hyperledger Fabric does not use its own currency.

Bitcoin, the first well-known decentralized blockchain platform widely used for distributed cryptocurrency creation and operability, operates a peer-to-peer network without central authority or banks and introduced blockchain technology to the world. It is permissionless, meaning anyone can join the platform. The management of transactions and the issuance of bitcoins ‘the native cryptocurrency” are carried out collectively by the blockchain network.

Ethereum is the second generation of blockchain technology. The platform is open-sourced meaning that it lets anyone program and use smart contract-based decentralized applications that run on blockchain technology. Smart contracts represent the execution of complex computations. A smart contract is identified by a unique address that has its own money balance (Ether, the native cryptocurrency of the platform), and upon retrieving a transaction to its address, it executes the contract’s logic. That is the simple version.

Ethereum focuses on the capability of automatic digital asset management, and, to do so, it supports smart contracts or properties, making the creation of the asset managing programs easier than when using the scripting language in the Bitcoin Blockchain. Ethereum in the same way as Bitcoin also adapts the proof of work consensus protocol, though with different parameters. Ethereum is a shared platform with more than 10,000 different nodes and more than 300,000 developers in the world who are developing open-source software on the platform. The innovations on the blockchain are distributed all over the world making it available for everyone everywhere.

Hyperledger is an open-source collaborative effort created to advance permissioned or private, cross-industry blockchain technologies. Unlike Bitcoin and Ethereum which are single-based platforms, Hyperledger is a family of multiple platforms for different types of applications for businesses. Hyperledger project is supported by the Linux Foundation, a non-profit consortium comprised of many different companies. Hyperledger is not for the public at large but specifically for businesses. Hyperledger technologies are being developed for business solutions across virtually all industries, including manufacturing and supply chain, energy, telecommunications, transport, education, financial services, healthcare, and the public sector.

As the use of blockchain must respond to different needs, Hyperledger provides an infrastructure to include a range of modules, such as various smart contract engines. Specifically, Hyperledger includes differentiated blockchain frameworks and tools. Each framework supports different types of consensus protocols. Hyperledger does not support proof of work and the additional privacy protection is yet to be included. It should also be noted that Hyperledger has global collaborations with various companies.

Bitcoin vs. Ethereum vs. Hyperledger

Now that we learned a little about Bitcoin, Ethereum and Hyperledger let’s compare them on some of the most important blockchain platform characteristics we’ve previously discussed. 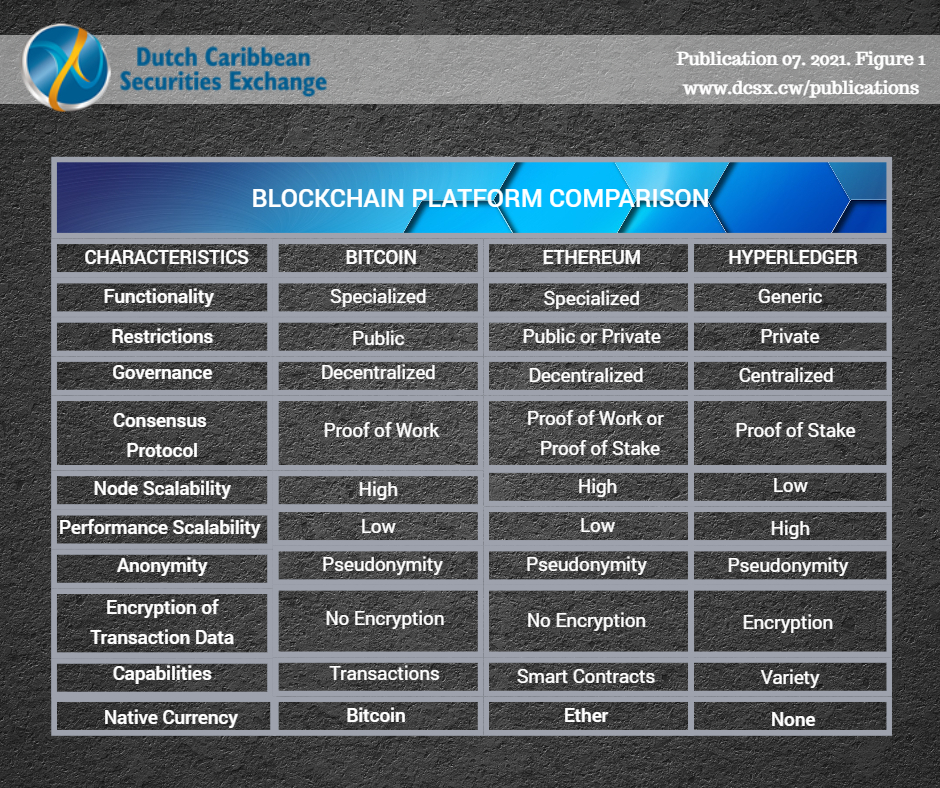 Because of the success and popularity of Bitcoin, Ethereum and Hyperledger, many other alternative platforms were developed including Ripple, Monero, MultiChain, Dash, LiteCoin, PeerCoin, Zcash, OpenChain, Corda, Stacks, Fantom, Polygon, Solona, Polymath, and Chainlink.

All in all, we see a great interest in blockchain technology from businesses and the public. On the business side, we see the changes in financial services, supply chain, and healthcare. With financial services, the use of the technology in areas such as capital markets, equity trading, mortgage underwriting, corporate banking, insurance, and compliance, has facilitated the work and, in some cases, has made the process more efficient. For supply chain, the technology is used in areas such as title tracking for high valued goods, cutting bureaucracy at ports and customs, and the use of IoT (Internet of Things) devices to detect poor shipping conditions. For healthcare, blockchain technology is used for provider directories and certification, patient-driven healthcare records, insurance claims processes, and the whole pharmaceutical supply chain.

While Hyperledger seems to have the upper hand on the business side, Bitcoin and Ethereum remain at the moment as the most popular blockchain platforms known by the general public. These 3 platforms have managed to maintain their title and popularity as the major blockchain players for a long time, but they do have significant competition from the emerging alternative platforms. Will they be able to maintain their position and popularity? Only time will tell.

As mentioned before blockchain technology is being used in the financial sector but is it as good as it seems? In the next publication we will explore the trilemma of blockchain “decentralization, security and scalability”: Do they matter for the capital market?

DCSX @ The Signing of the Incorporation of AMERCA