DCSX at APC’S Excited About The Future celebration event

Celebrating the listing of KQGJ

Last week October 31-2017 a special DCSX listing celebration was held at the Amidos Lighthouse offices at the Amazia venue.

“In a filled presentation room our guests from China with and representatives of our exchange celebrated the second listing of a holding company of a Chinese operating company: WSYS Another unique moment. It goes without saying that we see a large potential pool of listings from companies out of China and the Far East. No beginning is easy, but with this already second Chinese listing we have taken another important step in executing our mission which is: bring companies and investors from all over the world together”, states a happy René Römer, Managing Director / CEO of the DCSX.

The event was opened by Mr. Römer who briefly explained the specific case: the Listing Advisor (which is the professional advisor that brings a company to the exchange) is Shanghai Chucheng Capital Management (headed by Managing Director Mr. Li Houhai), and the company that is listed on the DCSX is Waters Years Holding Group Limited (headed by Chairman of the Board Mr. Chen Shoubiao). The company’s operating company in China is Jilin Waters and is based in the Chuan Ying District, Jilin City, Jilin Province, China and is engaged in the planting and sales of fruit trees (not including the production and sales of seeds) with a primary focus in its initial stages on the planting of blueberries, berries and schisandra products in general. The company has been in operation since 2015.

After the welcome words of Mr. Römer, the President of the Board of the DCSX Mr. Derk Scheltema also directed himself (partly in the Mandarin language actually) to the guests.

Last but not least we were honored by the presence of the Minister of Finance of the Curaçao Government Mr. Kenneth Gijsbertha who also addressed the ones present on behalf of the Curaçao Government, thanking the Chinese guests for the confidence in our country and the DCSX and reiterated that while Curaçao is small we can together with serious business partners do really great things.

Finally to officially seal the listing the “bell was rung” in good Chinese tradition by hitting a gong after which the guests enjoyed a cocktail and snacks. 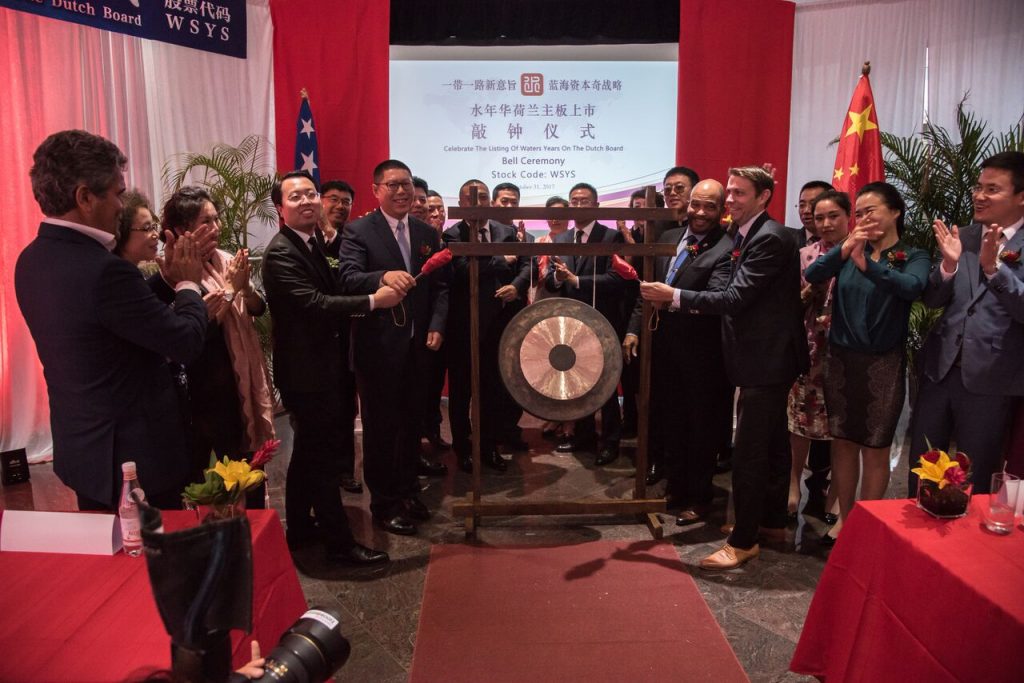 DCSX @ The Signing of the Incorporation of AMERCA