The Future of Energy

“Reinventing Central Banking: supporting inclusive growth and financial innovation” was the title of the 3rd Central Bank Conference of Curaçao and St. Maarten. The 2-day conference was held at the Central Bank on June 6 and June 7, 2019, and was moderated by Mr. Oz Eleonora, Founder, and CEO of the Zinica Group as well as an advisor to entrepreneurs in the U.S.A and the Caribbean and Supervisory Board Chairman of Curinde.

Mrs. Leila Matroos-Lasten, President a.i. of the Centrale Bank van Curaçao en Sint Maarten (“hereafter CBCS”) offered some welcome words. Through this conference, the CBCS hopes that it fostered a wider interest in the fields of economic, and financial innovation as well as making the role of the CBCS more visible and accessible to the general public. To realize the vision defined in the strategic plan of the CBCS to be a “ state of the art” central bank on which can be relied, the central bank has to continuously adjust its policies and approaches to meet the needs and demands of our community in a dynamic and rapidly changing environment. In this regard, inclusive growth and financial innovation are two areas where the CBCS can play a key supporting role to achieve sustainable development in Curaçao and St. Maarten.

The program of the first day focused on inclusive growth. Mrs. Candice Henriques from the CBCS discussed the current metrics to determine GDP and the best alternatives to consider by taking a look beyond GDP. Mr. Maksym Ivanyna from the International Monetary Fund provided insights into the important elements for inclusive growth including investment in financial education, access to finance, inclusive governance with people-centered commitments, regulations, and legislation and supporting new sustainable initiatives.

Mr. Martin Kanz from the World Bank discussed the debt forgiveness programs for households in developing countries, and lessons learned from the largest household bailout in history (In India). Mrs. Kari Grenade from the Caribbean Development Bank discussed the importance of conceptualizing a new development paradigm for the Caribbean by making policy priorities focusing on the blue economy, the green economy and the orange economy.

Up next, the Governor of the Central Bank of Trinidad and Tobago, Mr. Alvin Hilaire, elaborated on the lessons learned with the financial sector resolutions in his country. Mr. Narciso Campos  Cuevas from the Association of Supervisors of Banks of the Americas discussed resolution regimes. Ms. Shekinah Dare and Ms. Raïna Hieroms from the CBCS presented a panel Data Study of Caribbean countries on the determinants of Economic Growth.

During the first day of the conference, there were several moderated Q&A sessions wherein attendees were able to ask critical questions and engage in interesting discussions.

The second day of the conference was fully concentrated on financial innovation. Mrs. Ligia Lopes from the World Bank discussed the challenges and opportunities of inclusive innovation including financial inclusion, responsible financial access, and fintech credit among others. Mr. Errol Cova from the CBCS provided insights into balancing regulating and innovation. Mrs. Pat Chaukos from the Ontario Securities Commission shared her experiences with supporting innovation and modernizing regulation. Mr. John Kiff from the International Monetary Fund presented a roadmap for a Central Bank Digital Currency (CBDC) from general principles to implementation. Mrs. Sybil Welsh from the Eastern Caribbean Central Bank presented the pilot project for the Eastern Caribbean Central Bank Digital EC Currency (“DXCD”) and discussed the importance of bridging financial innovation and regulation ensuring inclusiveness for everyone including the small farmer with no access to a bank account. Mr. Cedric Pietersz from the CBCS presented the position of the CBCS regarding digital currency. The CBCS is currently exploring the possibilities and opportunities of a Digital Caribbean Guilder.

Mrs. Efia Luis from IBIS Management, discussed the possibility of a National Digital Currency as a Catalyst for Curaçao (E)commerce and Innovation and discussed some of the results from the research performed by students of the University of Curaçao (“UoC”) and the IBIS team of experts which is presented in a whitepaper. This whitepaper on the introduction of a Digital Currency in Curaçao and St. Maarten was officially presented to the CBCS during the conference. The UoC students believe in blockchain and have dedicated their personal time to the research with no student credit points included. Their work will not only serve as proof that we are able to do great things when we work together but it will also an incentive and motivate the Central Bank, and other institutions to embrace change.

During the second day, there were two moderated panel discussions wherein the presenters were able to engage with the attendees. The conference finalized with a happy hour. 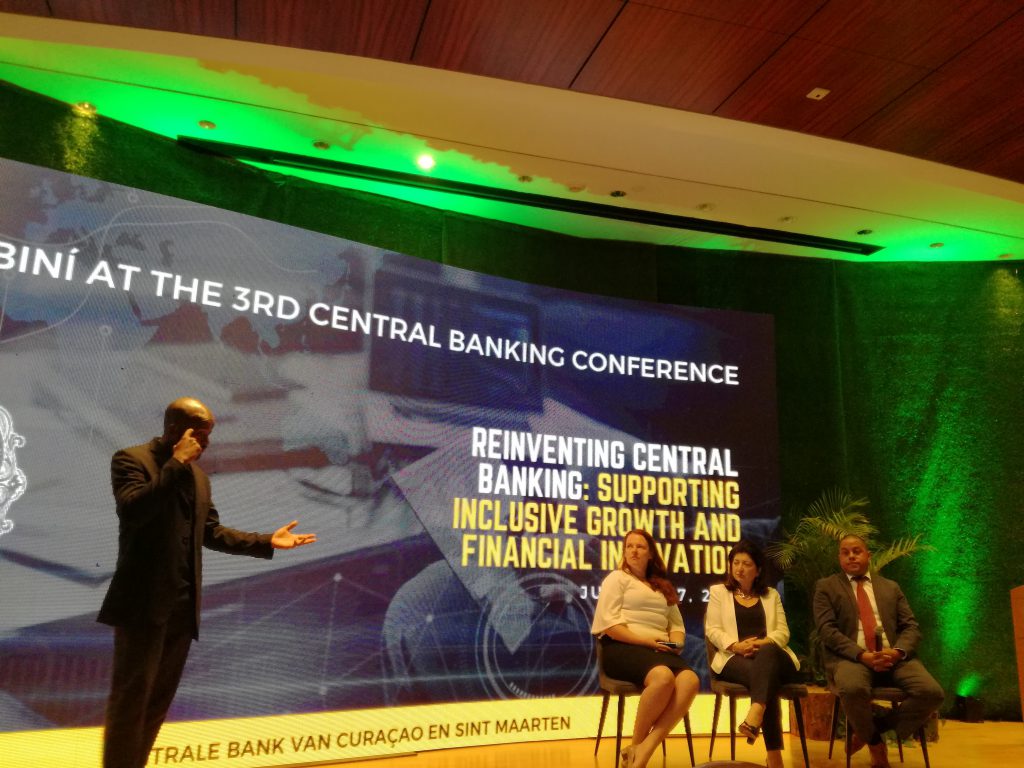 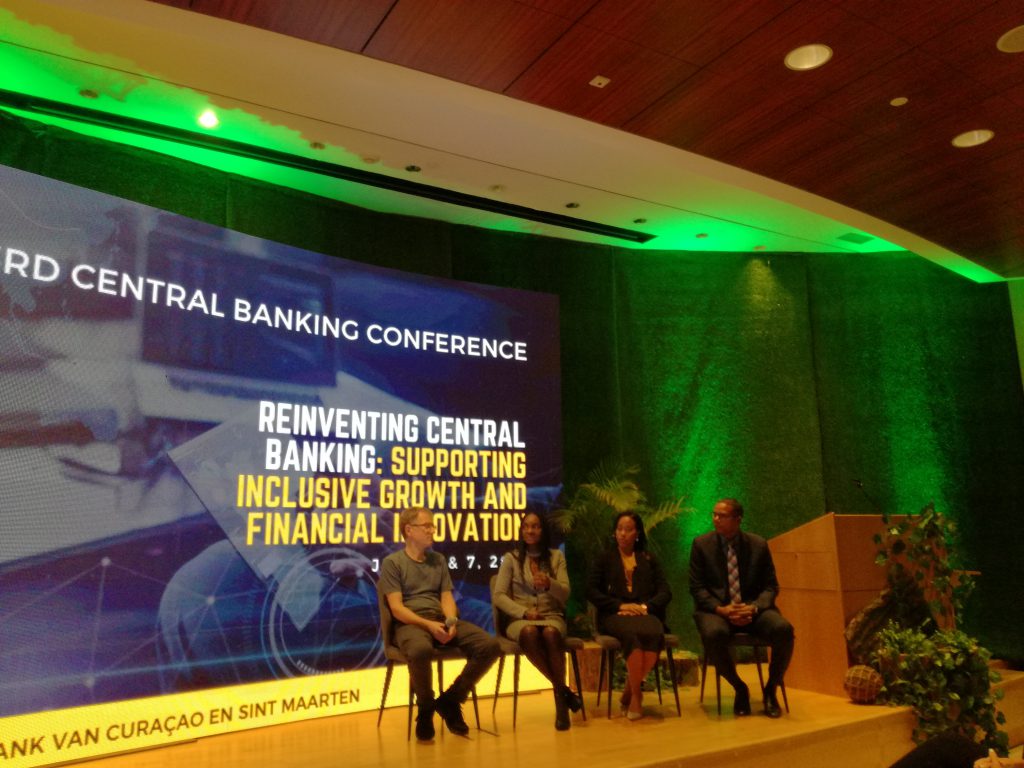 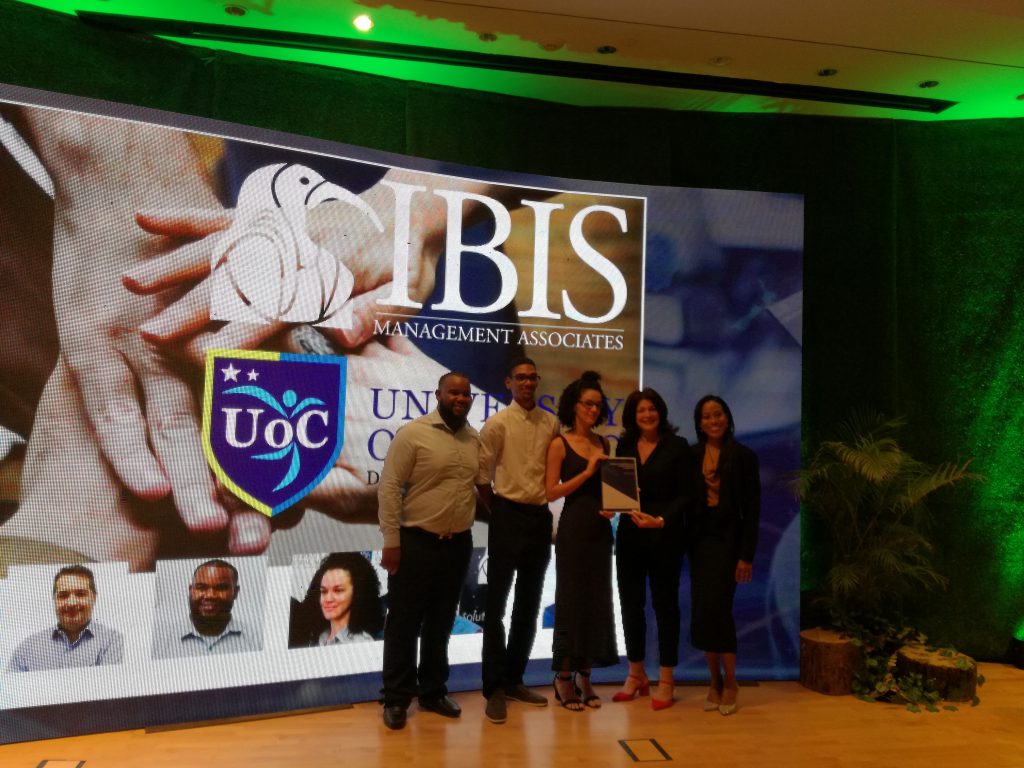