Understanding the Rise of TechFins

FinTech vs TechFin: What’s the difference?

The Impact of the BATs & the GAFAs on Business & Finance

Understanding the Rise of TechFins

As we mentioned in our previous publication “FinTech vs TechFin: What’s the difference?” Alibaba’s founder Jack Ma, coined the phrase “TechFin” as opposed to “FinTech” in December 2016. We discussed the difference between Fintech and TechFins, how they both disrupt the financial industry and the opportunities and challenges of TechFin, and the thereto related monetization of data.

Just a quick easy reminder on the difference between Fintech and TechFin: as illustrated in the figure below when talking about Fintech, Financial institutions and FinTech startups seek to improve the existing financial system processes with new technology. On the other hand, with TechFin, technology companies approach this issue from a more consumer and technology-centric perspective. 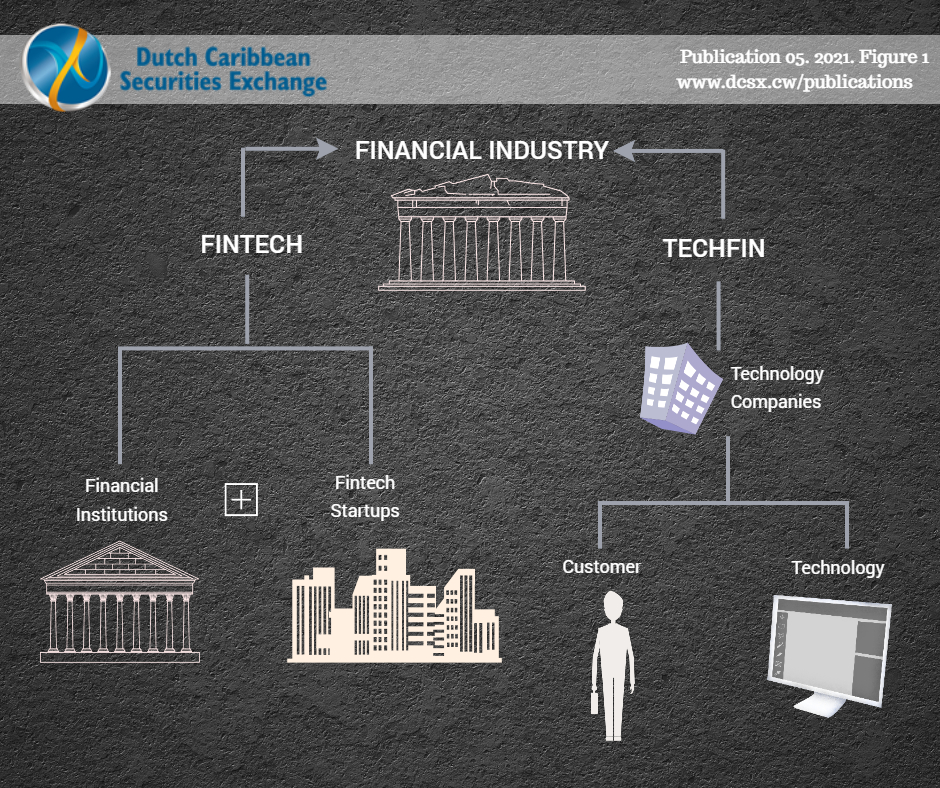 For the greater part, real TechFin originated in China. It is thus not surprising to see the growth of this phenomenon in the Asian Region. At the same time, however, it is impossible to ignore the globally well-known U.S. and probably some other (big) players that embrace this TechFin approach. They are the main competitors of the Asian-based TechFins. So going forward in this publication, when referring to technology companies we are specifically talking about the big players, a.k.a big tech, a.k.a tech giants, from the U.S., and of course, China.

The Rise of American and Chinese TechFins

Let’s compare the American big tech companies to those from China, to better understand their difference in origins and approaches. China’s big techs are commonly known as the BATs consisting of Baidu, Alibaba, and Tencent. In the United States, a commonly known acronym used the refer to big tech is the GAFAs: Google, Apple, Facebook, and Amazon. 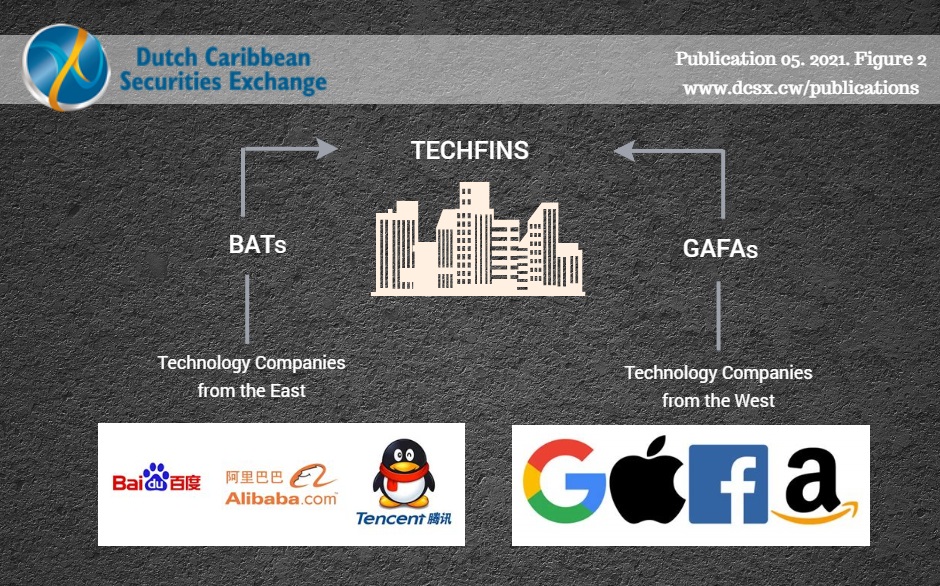 A quick look back: during the dot-com bubble and the web 2.0 era, today’s Silicon Valley big-tech grew mainly using advertising and the main purpose was thus generating more viewers. This has been the approach for a couple of decades already.

For those who don’t know or don’t remember, the dot-com bubble was a rapid rise in U.S. technology stock equity valuations fueled by investments in Internet-based companies during the bull market in the late 1990s. The Web 2.0 era is a reference to the early to mid-2000s where the term Web 2.0 was very popular. There is not a definitive clear definition of Web 2.0, but many referred to it as the move toward a more social, collaborative, interactive, and responsive web and a development that provoked a change in the philosophy of a web-savvy society as a whole. Web 2.0 marked an era where we weren’t just using the internet as a tool anymore, we were becoming a part of it.

In the meantime, through advertising Facebook successfully collected user information to further develop their ad-revenue strategy. Google, through its own multiple platforms (like Google Ads, Google Maps, and others) combined with their main search engine, linked commercial and personal websites, Gmail, and YouTube basically together for tremendous growth. Apple was primarily a hardware manufacturer, but through the years Apple changed its strategy, entered the streaming business, and set up its own App Store with its own payment platform which even included the option to pay in installments mainly with credit cards. Amazon, another super TechFin story, initially only an online bookstore, booked most of its transactions via credit cards and developed its own payment service platform “Amazon Pay” that they also offer to third party vendors, generating even more revenue and increased brand recognition.

In contrast, in China where the use of credit cards was never as popular as in the west, the tech giants incorporated payment transactions into their platforms from the very beginning. Alibaba started as a business-to-business or “B2B” platform. When it transitioned more into a business-to-consumer or “B2C” platform through Taobao, which is a Chinese online shopping platform, it introduced its customers to its sister company’s payment system, now known as Alipay, for customer’s transactions. Instead of Amazon’s money-back guarantee model, Alibaba provides comfort to its retail consumers by keeping payments of goods in a deposit account that is not released until receipt and approval of the goods by the customer.

The online gaming company/giant Tencent built in the micropayment’s options early on because its “freemium business model” was based on gamers making in-game payments in its free-to-play games, to buy say, awesome virtual swords. When the company transitioned into mobile and introduced instant messaging through Tencent QQ, which is an instant messaging software service and web portal for the youth, and then WeChat, they captured an amazing userbase of nearly one billion active users who learned to transact online.  This is stimulated by inventive tools like “Hongbao” where users can give and receive traditional red envelopes for mere cents.

Hongbao basically refers to the tradition of offering red envelopes filled with money to friends and family during special occasions such as weddings, the birth of a baby, or the Chinese New Year. This ancient Chinese tradition became a quintessential aspect of China’s digital ecosystem. WeChat now also allows users to use and transact via third-party mini-apps, including financial ones, without even exiting the instant messaging ecosystem to open new apps. In 2015, Tencent took it one step further and launched WeBank, China’s first online-only bank, using sophisticated credit analysis based on WeChat social media usage and online purchase patterns, that is also offered to service traditional lenders.

Baidu started by allowing advertisers to bid for ad space and then pay Baidu every time a customer clicked on an ad, predating Google’s approach to advertising. They then launched a news search engine and picture search engine, adopting a special identification technology capable of identifying and grouping articles. They further made investments in cloud computing, app development, and AI.

Today Baidu focuses on generating revenues primarily from online marketing services. Baidu’s pay for placement or “P4P” platform enables its customers to reach users who search for information related to their products or services. Customers use automated online tools to create text-based descriptions of their web pages and bid on keywords that trigger the display of their webpage information and link. Baidu’s P4P platform features an automated online sign-up process that customers use to activate their accounts at any time.

The enormous impact of TechFins is visible in China where fiat money practically doesn’t exist anymore. What has become very popular are Quick Response codes, or QR codes which are rapidly changing China into a cashless society. Built into WeChat and many other apps, China’s smartphone users can use scannable QR codes to facilitate offline-to-online (O2O) transactions, connect with others to replace the venerable business card, as well as to make payments. TechFins in China are able to have an immediate impact due to their large customer base -mainly- but also because of the existing rules and regulatory framework in which they operate.

Some non-real TechFin financial institutions are also benefiting from the success of TechFins in China by using their brand exposure to get a larger customer base. For example, Alibaba’s “Zhao Cai Bao”, an open platform for investment and financial products and services, offers fixed-term deposit products from third-party financial institutions or individuals, mutual funds, and stock market information to its customers. These compare with distribution platforms traditionally accessible only to institutional fund managers and to existing retail sales distribution networks via banks or retail fund managers.

In the meantime, in the West, the GAFAs are trying to mirror the success of the East. Facebook’s messaging app WhatsApp is incorporating a lot of WeChat’s innovative features. Apple has developed a tremendous and very sticky online ecosystem with App Store and iTunes. And Amazon’s Prime has paved the way for subscription-based models, with content as its competitor Netflix, to show that users are willing to pay for quality movie, television, and music content on an “as-needed basis”.  Most importantly, they are also investing heavily in the next generation of ABCD technologies and infrastructure: artificial intelligence, blockchain, cloud computing, and data.  Even though they also have a large international customer base they may not be able to be as quick as their counterparts of the East. Reason: they are faced with more inquiries, compliance with rules and regulations from the government or a specific territory they operate in.

Tech giants have brands that are trusted especially amongst younger financial consumers at a time when banks have lost trust after the global financial crisis (GFC) of 2007-2008. Even though traditional finance and banks are used to work within highly regulated environments, many tech companies have not completely adjusted to this environment. One could say that the U.S big techs from Silicon Valley are more used to ask for forgiveness than to seek for permission. This works just fine in the internet industry, where lines of code can be corrected and changed overnight on a website. This style of doing business is however not appropriate in a highly regulated industry like finance.

It will be a challenge for them to gain some advantage in the race against the TechFins of the East as a collective. Facebook and Google’s YouTube are constantly asking for forgiveness when something happens on their platforms. As a result, trust in using their platforms is decreasing due to the use of customers’ data and censorship. This may have an impact on their customer’s base that may choose to migrate to other alternatives. Amazon and Apple have the advantage of having a diversified business structure. They have the ability to maintain a significant customer base serviced with their financial products and they have the possibility to further expand into the financial industry. Overall TechFins in the West are able to directly participate and compete in finance, but it remains a challenge for them to get used to the regulations of the financial industry.

Exploring Blockchain in Capital Markets: Why it Matters

The Impact of the BATs & the GAFAs on Business & Finance